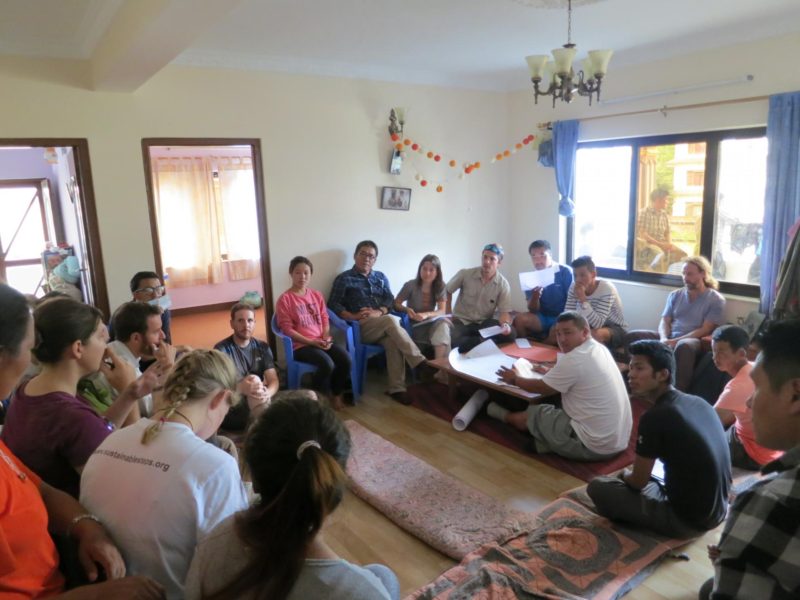 During these days the Langtang Commitee and various NGO’s were working on planification of the reconstruction of Langtang valley after monsoon. They have come up with various ideas to present it to the government of Nepal in order to get the help for the reconstruction. Although the exact figure is not specified but it is a very good base to start to work. You can read the ideas

Langtang valley lies around 130Km from Kathmandu, at height of 400m very close to the border of Tibet, china(Kerung). Langtang is one of the nearest trekking destinations from Kathmandu and is an unparalleled combination of natural beauty and cultural riches. It is Nepal´s first national park, and lies between the Himalayan range to the north, dominated by Langtang Lirung (7,245m), the highest peak in the área, and smaller peaks to the south-Chimse Danda(ridge), Ganja La pass (5,122m), Jugal Himal and Dorje Lhakpa(6,989m).

Langtang is the most accesible of all the trekking regions, there are no 8000m peaks in the vicinity (unless you count Shisha Pangma, across the border in Tibet)-it makes up for in base-to-peak rises that are as dramatic as anywhere. Langtang, in particular, delivers more amazing views in a short time than any other walk-in trek in Nepal, with the posible exeption of the Annapurna Sanctuary.

Then on the horrid day April 25th Langtang valley had to face 2 worst disaster, forst it was hit by earth quake of 7.8 Magnitute earthquake during which it faced the moderate destruction then the unthinkable happened the side of whole of the mountain gave way and the biggest avalanche of that region occured the forcé was so strong it hit the other mountain and revert and covered the village with glacier.

The once beautiful village is no more . It is all covered with glacier. There is nothing not a trace of existence of the village. After the earthquake when everyone thought they were safe they didn´t even had time to breath the sign of relief. When they heard another boom sound and before they could realize what was going on a gush of dark wind filled the place and breathing was impossible. And then the avalanche came for almost 10-15 minutes. It kept coming strongly from one minute to another destroying everything in its route.

On that dreadful day 250 houses were destroyed, 175 resident local died, another around 150 Nepalease died and around 60 foreighners lost their life that day. Infact the number of dead is still not verified as it is impossible to go back or dig  or do anything about it.

488 people from langtang were rescued after almost 5 days and are camped in Yellow Gumpa in Swoyambhu, Kathmandu. Only the survivors knows what they had to go through and how they survived and what ordeal they had to face.

Rehabilitation of Langtang village is a humongous task, the habitants of Langtang has recognized following issues as the primary issue.

1.Announcing the valley as habitable

Government has announced the langtang valley as inhabitable, which gives very wrong concept to whole world. Though few kilometer has become utterly destroyed there are major parts of valley which is still extremely beautiful and risk free. Geological mapping should be done in whole of área so that it builds confidence in everyone. Government should make aware that the valley can again be visited, with just few maintenance and government full support langtang valley can spring back for next season that by February 2016.

Though langtang and bit of kyanjin village has been devasted but major part of the valley is still liveable. The whole valley streches still 26km and habitation by human is basically 13km distance specially from Rimche to Kyanjin Gumpa. Hence villagers main demand with the government is exchange their land with the land that is still safe mainly, Rimche, Lamahotel, Riverside, Chunamu, Ghoratabeta, Pari, Thangshep, Mundu Phalpa, Nesphali, Chona and Kyangjin.

126 families request to get their land Exchange, they demand that they should be given land deeds and not treat them as refugees in their own country.

Whole langtang depends on tourism. There is not much of cultivable land and no other major industry can be set up, hence government has to put major funds to bring the whole tourism back that too within next season. For this to happen special attention should be given to the following

Immediately after the monsoon season the work has to resume in the trekking route of 26km route. Only in 5 places the work needs to be carried out which is about 10meter-15meter strech except for the one in Ghoratabela which is about 25meter in length.

There are about 10 hanging bridges that needs to be repaired of 75-100meter each.

Government needs to do special attention and promotions in local as well as international media to increase the tourism. Government has earned billions of rupees from this region it is time to give back to whole of reason.

To bring back the charm in Langtang village and around government should do special tree planting projects.

The only school which was at Khangchep has been destroyed but not fully damaged hence the rehabilitation is required.

There were 3 famous monastries in the region. 2 were in langtang village which are fully damaged and 1 in Kyanjin. Hence archeological department has to look into the possibility of exhuming and valuables from the rubbles and then restore it. Then the Kyanjin Gumpa has to be restored.

The houses has to be reconstructed with respect to earthquake, weather condition, culture and tradition. The houses should be made according to the family members and should be environment friendly, good care should be given to sanitation and water system.