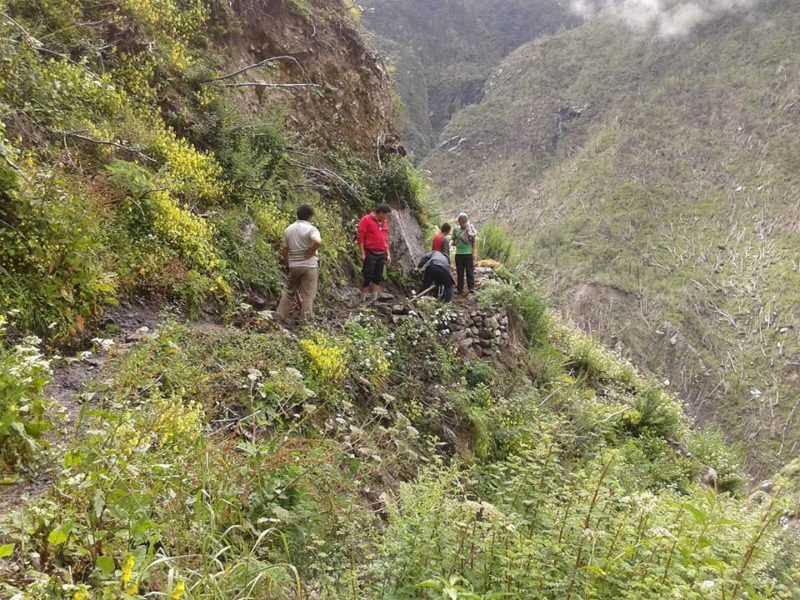 Almost all the people of Langtang has moved back to Langtang. The camp in Yellow Gumpa where they were taking shelter more than 4 months in Kathmandu is empty now.

Many of them went in helicopter to Langtang but many took a normal trekking trail. Now only the the children who are in the school and the women who can´t literally walk due to the injuries caused by the April 25 remains in Kathmandu.

Although after 5 months, the government of Nepal still has not assigned any specific area for the reconstruction, the people has already started working on opening the trail.

They started from Kyanjun Gumpa and they reached to Gumna which is 2 hours down to Godha Tabela. The people believes that by the beginning of October the trail will be ok for the trekkers. The hanging bridges will take longer time to be rebuilt, because it also depends on the government and the villagers can not do anything. So it will take longer time to get to langtang without the hanging bridges but it was how trekkers used to trek 10 years ago. They need to go down to the river to cross small bridges made of bamboo and then up again. This requires much more time and effort and is more complicated for loading animals, as they have to climb stairs of stones or steep trails.

The people have already started to move on with their normal life by feeding their animals and producing Yak Cheese although the reconstruction work is stucked at the moment.

At the moment they are taking shelter in the nearby villages of Langtang like Mundu, Sindum and Kyanjin. They constructed small Yak huts to take temporary shelter. The people started with their rituals in Nepal for the people who left us. Just few weeks a ago a great Tibetan Lama Khentrul Lodro Thaye Rinpoche  visited the village Kaynjin a village where almost all the survivors of Langtang are taking shelter after they returned back from Kathmandu. For us it is very important to perform all the rituals for the peace of the people who died. We believe that if we miss some rituals than the spirit of the demise might loose their way to heaven. It is equally important to comfort the family members who have lost the hope of finding the bodies of their loved ones. It it not a easy work to go back and live a normal life as if nothing has happened.

In Kathmandu they do meetings and organize to go to Langtang. They plan to divide tasks in groups. They put all their strength and energy into it, but when they return to Langtang and see the immensity of the disaster they just get numb and paralyzed, not knowing where to start, not knowing what to do … Many villagers expresses that tears begin to fall from their eyes, and all that energy and plans fades away …

They no longer feels pain or anger in the heart, but a kind of hopelessness invades them, and feels that it is useless to do anything … But they also assumes the reality that there is no any choices left behind than to look forward and carry on and finally they start to work again. It is so horrifying to see how the lively and beautiful village with full of peace and happiness has turned to be a massive cemetery.

Leaving behind those pain, the strong people of langtang are moving on and they hope that soon they get their normal life back and get the tourism blossom in Langtang. Now next challenge for them will be the winter (December to February). People can´t stay in Langtang without houses. The snow covers almost everything in winter and this winter people does not have tools to resist in langtang.

Normally we store firewood and food for people and animals during the months of monsoon. But this year came up with different circumstances.  Apart from having no place g to store , there is nothing to save now. And during snowfall the helicopters cannot fly to langtang with supplies, since there is no place to land and flights are very dangerous during winter.

So the people of Langtang have to return to Kathmandu. Although some people decided to stay back and resist the heavy snowfall.

Winter in Kathmandu is harder than the monsoon . People can´t stay inside the tent or under plastic roofs. The families might need to rent small rooms to pass at least the months of winter.

At the middle of February 2016 the people will go back again to Langtang and will start the reconstruction. They are with a big hope that every NGO´s and people around the world might help them with the reconstruction of Langtang.

You can see more about Langtang in the facebook of Langtang Committe.

5 October- News about opened trails to Langtang from The Kathmandú Post.