On 13th July 2016 the documentary “RISING NEPAL” was premiered in cine Aribau de Barcelona. The documentary was filmed just 3 months after the earthquake by a famous Spanish production ACCA MEDIA. The production home also have documented Españoles por el mundo, Gurba, the dream of Haiti.

The movie theater was completely full and  the documentary was a huge success. It is so good to see and know that people are so in love with Nepal and always have an open heart to help Nepalese.

When I first saw a post in the Facebook wall of the director of the documentary Miguel Ángel Tobias about wanting to fly to Nepal and project the consequences of the disaster. I desperately wrote him and explained about Langtang, the vanished village by the earthquake. He replied me with so much comprehension, empathy and care. But I did not realize at that time that the documentary in itself would be so informative and graceful. Thank you so much so much Miguel Ángel Tobias and the crew of ACCA MEDIA.

There are about 5 protagonists in the movie. The life of each of the protagonist has been affected in a very sad way. Among them there is my dad and one of my sister. I can understand how difficult was for my dad to explain the tragedy of losing everyone and everything just in a matter of second. And living the bitter moment again and again. But I know that he is a super dad. The same goes with my sister who has gone through so much in such a young age.

She moved to Spain few months after the documentary was filmed. So she was there in the premiere. She is not a actor so I can feel how painful was for her to stand there in front of so many people and see the reality. But again she is a strong lady and she understands it has to be in this way and life goes on.

In the premiere there was a presence of Lama Thubten Wangchen La and Honorary Consul of Nepal in Barcelona, Lluis Belvis. The documentary will be presented in various cities of Spain and also in other countries shortly. Please stay tuned and support Nepal.

Many Nepalese were present and showed their love towards the country. Just a week before there was a big Nepalese Festival in Barcelona. Where the city converted to mini Nepal.

The most touristic area of Barcelona Tibidabo converted to a mini Nepal. The big festival was organized by Non Resident Nepali Association in Spain. There was a big participation of Lluis Belvis the consulate of Nepal in Barcelona. And Nepali ambassador to France, Ambika Devi Luintel as  an honorary guest.

The place reminds me of Swayambhu (Monkey temple in Kathmandu). It it because it has a panoramic view of Barcelona, like we have view of whole Kathmandu city from Swayambhu.

The fest was inaugurated by a National anthem.  During these two days there were traditional Nepali music, dance, food, street markets and many more. The people enjoyed the unity in diversity. These sorts of festivals will help the Nepalese living away from their home country to share their feelings, ideas and keep the culture alive.

The festival also was accompanied by the peace speech of great Buddhist Lama Wangchen La.

There were slogan like “Visit Nepal”, “Nepal needs you more than ever”.

The fest was a successful one. Many Local Spanish visited and also many tourists. And Nepalese were proud to be able to show the culture outside Nepal. 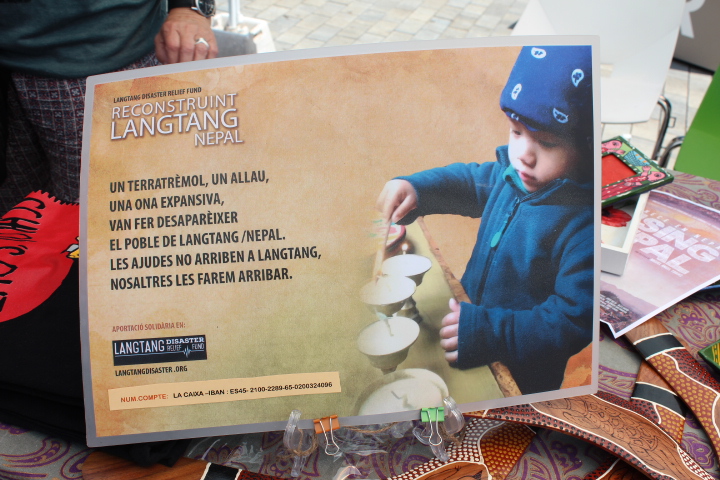