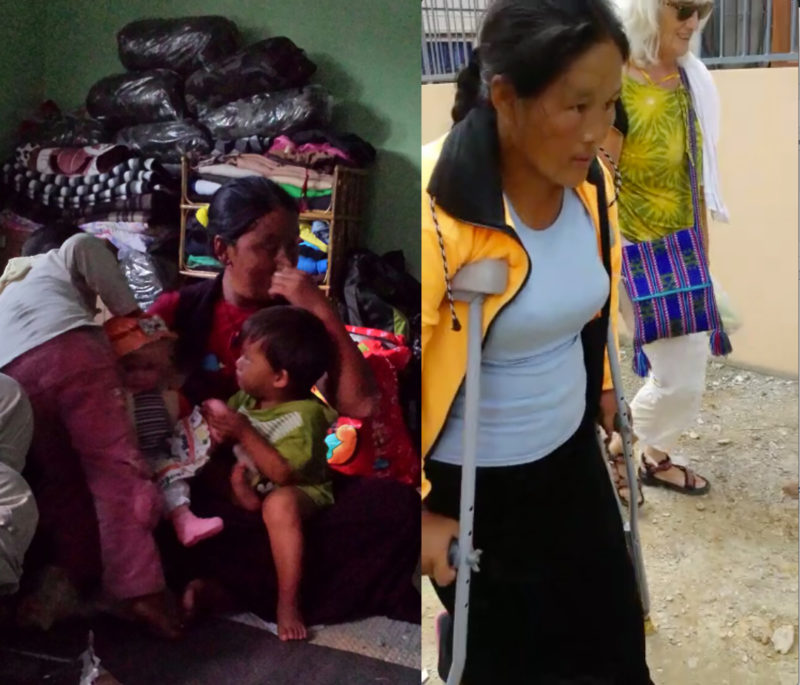 Few months ago we told you about two courageous women who survived the avalanche in Langtang, although the two were seriously injured. Carchung and Chumzo will be marked forever by what lived there … Chumzo lost her husband in the tragedy and is left alone with 3 girls. It took three days to rescue her from the mountain where she was paralyzed due to serious injury in the spine. Along with her young daughter Pemba she was rescued to Kathmandu where she was treated at the hospital. Three weeks later  the other two daughters were brought  to the refugee camp of Yellow Gumpa where Chumzo was staying.
Chumzo was partially paralyzed, no one knew whether she could walk again someday, and during these months she has been under permanent care of the other villagers, who helped her in the simplest daily tasks. She  also received financial support from some NGOs, such as Langtang Valley Health, to take care of her health and children properly, and help from sponsors through which her daughters , Pasang and Dechen, are in a school where they have shelter, food and education . All these helps were very important because Chumzo couldn´t take care of herself and without these helps she might not have survived. Karchung was seriously wounded in her legs when she was running, trying to escape the rocks falling from the mountains. She was stayed on the floor and exposed to all impacts. She thought she would die there, and at one point wished it to happen and die as soon as possible when she felt a terrible pain in her leg which was broken into pieces. Her husband came for her after an hour and took her to a cave, but her agony lasted three days until she was rescued and a helicopter took her to hospital in Kathmandu. We could say she was lucky, because others died waiting to be rescued.

Luckily her children were in school in Kathmandu when the earthquake struck Nepal, and did not happen anything to them.

In the hospital she underwent several operations, first to fix the broken bone grafts and then to try to recover the skin of the legs.

These two women, like other villagers in Langtang, had lost everything in a few minutes and faced an uncertain future and no thought could recover some day …

But today we can say that surprisingly both of them have regained some mobility, and although they may not have normal life but slowly they are the way to it.

Although the two have had to spend most of the rainy season in the camp, now they have a room to take shelter during this winter in Kathmandu. It was very difficult to find rooms to rent, because after the earthquake the rents became very expensive due to the lack of fine buildings. Many land lord took this crisis as an opportunity or a business and went on increasing the rent.

The NGO Kinderhilfe are paying the rent for Chumzo so she can be with her daughters in an apartment in Kathmandu. There she receives attention and care of her elder sister, and now she can handle almost alone.

Karchung also received a little help from the NGO Langtang Valley Health that allowed her to spend the first days in Kathmandu, and now she has also rented  a room for this winter. To pay the rent, initially she received support from the sponsor of her young son Nima, after Javier (sponsor of another Langtang child) paid three months more, but now she no longer receive aid from anyone …

As you can see in the previous video she has begun to move with crutches, but her legs were swollen , it hurts and itches a lot, and the doctor told her not to move because it is complicating the recovery and she may have to undergo another operation. Still needs help going to the bathroom, go shopping or do the cooking … Her husband helps, but often he goes to Langtang, and their children are in school and so she tries or have to do the things by herself. It is a difficult situation … Maybe in the future she can find the help of Kinderhilfe or some other NGOs that can ensure Karchung housing for a long time.

Both of them have been receiving small donations from various organizations and individuals who have visited them and have contributed to make their life easier and give hope and strength to carry on. Nepal is a country where there is no aid for disabled persons by the government, so all the aid has been very important. These women who have always worked hard and moved on with the life were slapped by bad luck, and if no one would have helped them it would have been impossible to this miraculous recovery. All the villagers left Yellow Gumpa and most are up to Langtang to work on the opening the ways and are starting with the work of initial reconstruction of the village. This two women had to stay back in Kathmandu. Although they started to gain mobility, they still need to take care. Chumzo was very worried so she went back to Langtang for few days in helicopter to gather the things or materials of her ruined house which might be useful for the reconstruction. This recovery is the result of the help and love we got from the world family. Thank you.