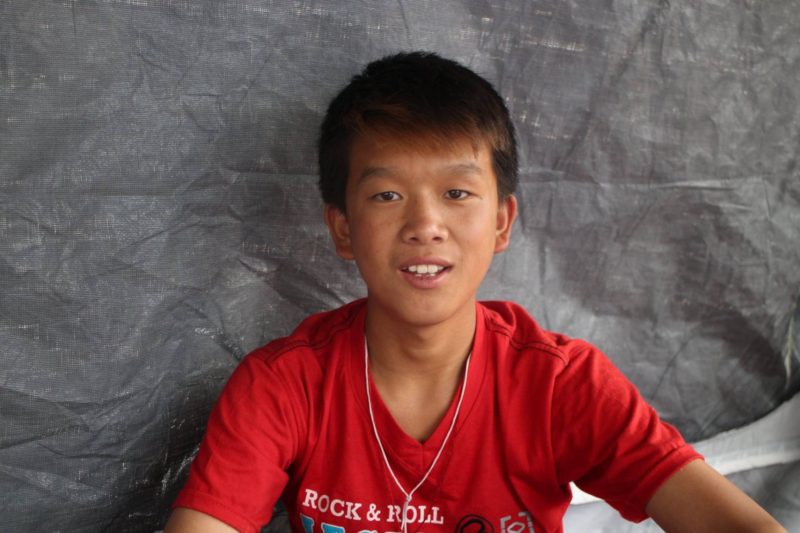 I would like to thank Chimay a boy of 14 years old from Langtang for his bravery. He is a real hero for me and for everyone. I would like to narrate the story in first person, exactly the way he told me. You can know how great he is from his story.

‘’I am Chimay of 14 years old from Langtang. I have one younger brother Lhakpa and my parents, Sangey and Karmu. I was actually raised by my late grandparents although my parents were always there for me. Like all the Nepali and specially the Langtang people, I have a story to tell the world about my survival during the earthquake followed by massive avalanche on April 25.

Like so many students from Langtang, I was in my holidays from the school in Dunche to my village Langtang. The day before the earthquake there was a big 49th ceremony of one old man who passed away in the Gumpa village. That night we enjoyed and danced as it was the last day of the holiday and than we had to go to school.

The next day my parents and my younger brother headed to Kyanjin Gumpa and I decided to stay back with my grandparents. I woke up at around 10a.m. I told my grandma that I will be back for the lunch and I went to my uncle´s place. We were 6 people around the fire in my uncle´s place. There were 2 tourists. We were having a tea. Suddently the earth started to shake and the tourists ran outside. I was numb but I took the Little girl Lhamen and I went underneth the bed. But my two uncle stayed still around the fire. Just in a matter of minutes we heard a terrible noice. I thought it was the end of the world.

Than everything started to fly in the sky. We were covered by snow and rocks. The house was not there anymore. I took the girl and I stook up. I looked around and what I saw was nothing. The whole village disappeared. I was ok physically and the Little girl too. I didn´t know what to do and how to react. So I prayed to the god for a while as it was something I learnt from my grand father. He was a known Lama of my village and he was my teacher.

I was wet and the Little girl too. I rubbed her hand and gave her my jacket. Than I went near my two uncles. They were very injured and couldn´t move. Both of them had broken their hands and one was injured in ribs too. I told them to wait there for me. I ran to my grandparents. The house of my grandparents was not there anymore. I saw dead bodies of the villagers on the way to my grannys house. I just saw that the downfloor of one house was bit ok. I looked around for my grandparents. Than I saw my aunt asking me for the water. She used to live with my grandparents. She was covered with rocks and snows. I took her out and went for a water. I didn´t find any water. At last I found a bottle of water and I ran towards my aunt. It was little late. She had already gone from this world.

Than I went to my uncle´s place again. Took my both uncles in my shoulder and the little girl and made them stay on the downfloor of the house which was safer. I really didn´t know what I was doing but I had the energy and I had no fear. I ran again in the village, looked around and saw that both the tourists who were with us were very badly injured. I took these two tourists to the same place where my uncles were. Than I came back to the village and saw one woman lying on the gorund. She wasn´t crying but she was breathing. I helped her and took her to the same place too. Than I saw one man who was ok but he was drunk. I asked him for the help. We helped another man named Choempel of 27 years old trapped between the rocks. I told the drunk man and Choempel to go to the place where I kept rest of the survivors. I ran, but I didn´t panic. I had energy. I went to my aunt Tsering Chokpa (45) house. I heard the noice. She was pleeding for help. But I could´t see anyone. After a while I saw her clothes. She was fully covered by rocks and snow too in her ground. I took her and yes, she was very injured too. She was bleeding. Just near her, there was her daughter of 21 years old. I moved the daughter but she was dead.

I was walking with my aunt. We heard another voice and there was an old man Lawar Dawa. I took him too from the middle of trapped place. Than on my our way, we saw another old woman Karchung(80). She was unconscious but after a minute she was ok and fine. We all went to the same underground floor. We spend the night there without food and water and in cold. Everyone was panicking and in a pain. At night around 11 p.m I went to look for my granny and I didn´t see them.

One of the tourist was very injured and bleeding. At around 12p.m he died. We were scared and sad but we could do nothing. The next day I took all the people to the only house in Langtang which stands in feet near the cave. At around 10a.m my dad and younger brother came from Kyajin Gumpa to look for me and the villagers. We went together to search the survivors. We found our grand mother´s body but grand dad was still missing. The villagers who came for look after the people spend the night in the same house where we were.

The next day the rescue team came and took the injured tourists from Langtang and around langtang. There was around two flights and took some other injured people from village too. There was aftershoks and also the rocks didn´t stop to fall down. The villagers and the tourists decided to wait in the hospital without roo fon the top of hill of Langtang. I went with my dad to Kyanjin as my mum was worried. The next day we came another time to langtang and found more bodies of the villagers. We burnt some of them. It was sad and scary.

I was there going up and down from langtang to Kyanjin for more than 10 days. Finally all the villagers are evacuated to Kathmandu.

When I think of the nightmare, I just wish the time to go little bit back.. I wish everything rise and we can have a normal life again. It will be very difficult but I hope it will rise again. I miss my grandparents. I miss Langtang, and I miss everyone. What I saw in Langtang will be a challenging thing for me to erase from my memory’’.

So this is the story. And it was Chimay who gave new life to 9 more survivors from Langtang. Currently he is going to the school in Kathmandu and visits his family at the Yellow Gumpa from time to time.