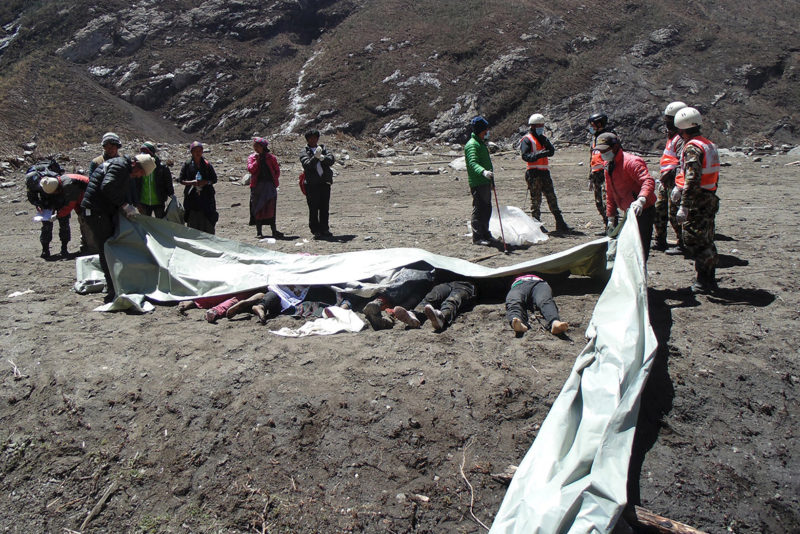 The brave and innocent villagers of langtang recovers 53 bodies

It has now been more than a month since the people of Langtang were evacuated to Kathmandu, where they are living as refugees in the gardens of Yellow Gumpa. Many are tired, depressed by the situation… They have always been self-sufficient and cannot bear to live like this.

As we know that on June 1st a group of 20 locals and on June 3rd another 20 locals of Langtang village decided to go to langtang in search of the bodies of their loved ones, to take their animals in safer place and also to collect their valuable things if they could find which they might need for living when they decide to stay back and start the reconstruction of the village. The trekking trail which we take normally to get to langtang was fully devastated by the earthquake and landslide. It has been more than a month that people of langtang were evacuated to Kathmandu were they live as a refugee in the open ground of Yellow Monastry.

The way from Kathmandu to Syabrubesi by bus is very difficult because of landslides. And the way by walking 2 days from Shyabrubesi to langtang is more than dangerous to everyone.

One villager ‘Lhakpa’ states ‘I took the way of Shyabrubesi to Langtang more than thousand times in my life, but this trip made me feel like it’s the last one I m going to walk through this way because the way was just horrible’. This shows they challenged the death. The people were desperate. They just wanted the government to provide helicopter so that they can go and look for their loved ones. It was difficult for them to stay with their arms crossed in Kathmandu and waiting that the dead bodies to convert into ashes. The government didn´t provide them the helicopters. And didn´t gave the permission to the locals to go to langtang by foot. But the brave and desperate people went on their own risk. They were forced to be accompanied by 17 Nepalese militares.

Thanks to these brave locals that they recovered 53 bodies along with the bodies of 3 foreighners. Without the effort and participation of the villagers the professional or armies could have done nothing. The villagers perfectly knew where the bodies could be, which way should they take and how they could trace it. How can it be that the government ends a search, and then some men decide to continue searching and find 53 bodies? What would have happened if they had been allowed to participate in the rescue efforts a month ago?

As on coming 12th June, Friday there will be the ceremony of 49th day ritual after the demise of someone. So Many of the locals who went to langtang are back to Kathmandu. But few decided to stay back in search of the bodies with the armies. And they will ofcourse help the embassies or any agencies if they decide to go up to langtang and look for the the loved ones of their nationalities.

The decision of locals going back and few staying there in langtang not only limits in looking after the bodies. The villagers had lots of valuable things including golds and money. In last few weeks there have been people/thieves getting there and stealing those things. So people were very much worried about those cruel activities taking place in such a tragic moment. These valuable things were their hard work throughout their life. They will need it for their survival in the future. They can´t only depend in the external help. As soon as the monsoon ends people will start to go to langtang and the reconstruction work will take place. These great and kind people needs your hand.

If you want to read more about this news:

NepaliTimes– News from Nepal where narrate different stories of survivors and mention the web of Langtang Relief Fund, but wrong in the quantity of the collected donations, which now reaches 12,500 euros.