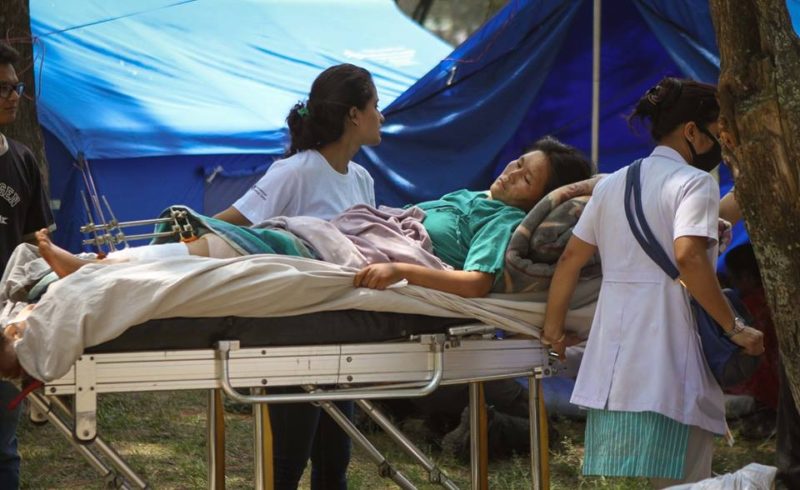 The only Tibetan family without Nepali residence in Langtang

Karchung a woman of 32 years old still continues in Patan hospital after undergoing several surgery in her left leg. And doctor can’t guarantee if she can ever stand on her feet.
She is married to Bhopa Lakpa (Bhopa means Tibetan) of 35 years. They have two sons of 14 and 12 years respectively. The younger boy is disable and can’t speak but he is very clever boy. And the elder son goes to a Tibetan School in Kathmandu. As her husband is the only person without Nepali nationality in Langtang/Nepal so this lovely family never had right to have properties in their own name. Lakpa was a shepherd. They made their living by seeling the yak milk. They didn’t have guest house or tea shop which limited them from getting in contact with the foreigners or having friends from abroad.

After the devastating earthquake and avalanche in Langtang almost all the family receives aids from the sponsors or Trekkers who crossed by their guest house. But this family is still without any aid. They are used to it,in not getting help or no one visiting them asking for their condition but I think they are human too so at this critical situation at least they deserve little care. This is how Karchung explained me her survival from the disaster:
‘On 25th April around 9am me and my husband prepared our things to go to our yak hut to look after animal. We started to walk down to Thangshyap. We were accompanied by two little nephew of 11 and 13 years old. On the way down one friend wanted us to have a tea at her tea shop. It was around 10am. My husband didn’t wanted to stop so he continued. But me and two nephew we stopped for a tea. After that we walked down and my friend accompanied us too as she wanted to go down and get milk.

We were on our way. The earth started to shake. We couldn’t understand what was happening. Than it didn’t stop and shook so strong. In a minute we heard a very strong sound which left us nearly deaf. It was like a bomb blast. Than the the mixture of rocks bigger than the size of a house and snow started to come towards us. We started to run here and there. The sky was covered with a black thing I don’t know what it was really. My eyes was full of dust and I could hardly see anything. My friend broke her hand and I tried to help her. I took my friend and the two nephew to a safer place (cave). The rocks didn’t stop to fall. It was like a shooting starts but millions at a time.

We stayed there and I heard one tourist asking for help. I couldn’t see him. But I followed his sound. Suddenly I was trapped between two big rocks that fell straight to me and covered fully by rocks and snow. My left leg broke down into pieces and it started to bleed. The rocks didn’t stop to fall and hit me on my head and back. I was conscious although I couldn’t move and tolerate the pain. I turned to left and saw the tourist just near me. I was so helpless. He was very injured and asking me for the water. I cried, I cursed the God because I couldnt do anything. I was just waiting to die too. After 10 minutes he didn’t make noise and he left us. I took a stone and started to hit myself because I just wanted to die as soon as possible. I was very helpless. After half an hour my nephews came down to look for me. They couldn’t help and I asked them to run and go to the same place. They cried and didn’t wanted to leave me but I pleeded them and they went.I was just waiting to die.

After an hour my husband came to look after me. He took me from the middle of rocks though he was injured in his head. He carried me to Godha Tabela in the hope to be rescued to Kathamndu. I saw lots of injured and dead bodies on the way. When rocks started to fall there too we moved to another place. I was carried to everyplace. My pain was very strong and bleeding like a river. That night we slept with other survivors in an open land. It was raining.But at night too we had to run because nowhere was safe. All the blankets, all my clothes were covered with blood. The next day we hoped for the rescue but the helicopter took only the tourists and some leaders from the village. People started to run here and there. I couldn’t move. I had to be carried. People stepped on my injured leg. I asked my husband to leave me there to die because when he runs carrying me, my leg moved and it hurt like hell. He decided to stay back with me and told me if something happens he wanted to die with me too. Than I thought of my two beautiful boys in Kathmandu and I aked my husband to carry me. We moved to next place. After three days of pain finally the helicopter rescued me to Kathmandu. I was taken to Patan hospital. In an airport there were news agent. That night I was in the television news and my little son saw me. Teacher told me that he cried so hard that he was unconscious and asked them to take to me that same night. Next day I got operated and my sons visited me.

Now I am here in the hospital knowing that nothing is left behind and not knowing when I can move on my own. The nightmare kills me alive day and night. I lost all my family members. I lost my 2 elder sisters and my mum. I lost everything what I earned through out my life. Now I don’t know if I should feel lucky because I survived or it would have been better if I went with my mum and sisters instead of being a burden to my husband with broken leg.’