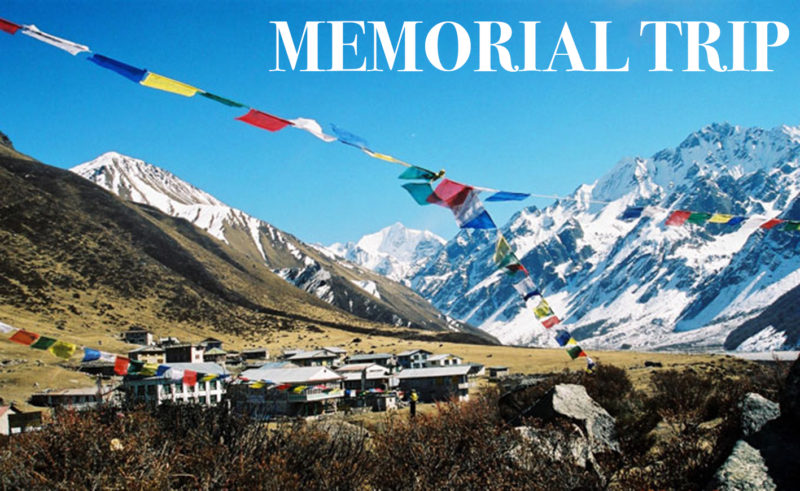 Most of the survivors of the avalanche on the 25th April 2015, along with relatives and friends (almost 4000 people) keep in touch at facebook group “Langtang Missing/Found people”. The group was created by Kitty Heldwoman and main objective was to get information about missing people at Langtang area and coordination of searching and rescue activities. Finally it become a meeting point for interchange of ideas for all the ones with the aim to help the people from the missing village of Langtang and recovering the whole area of Rasuwa.

They are working to coordinate a groupal trip to Kyanjin Gompa by April 2016, to celebrate (along with the local survivors) a nice tribute for the missing people at the valley’s tragedy. For many of the relatives and foreigners friends, this is the only chance for goodbye their beloved ones where they rest in peace, it is also time to share experiences with other relatives and survivors going there with same motivation.

People from Langtang Valley will really appreciate as they lost relatives there and they will give a kind welcome to whom is keen to join them in this tribute one year after the tragedy. We are all together on this….

Oscar Olea was in Kyanjin Gumpa by the time of the earthquake, he is already helping with the arrangements of this big trip by creating the web JUST BREATH & KEEP CLIMBING, he explains in there how they will manage to make it to get also profit for the local economy. He wants to involve the tourism agency “Expedition Himalaya” (the ones who survived the avalanche in 2015). Through them would be provide guides, cookers, porters, etc, from Langtang and Rasuwa’s area. There are so far 40 people to join the trip and it will bring jobs for the locals (right now they are living just from charity). Due the troubled times, it is very important provide them with some activitie to get a salary. On top of this, no one better than guides and local porters to share experiences about the earthquake with visitants and let them know the reality of the area. That will be the way we will create a strong link and the trip will be a real tribute. Even by the next year the recovering activities will be already on going, it might not be houses to allocate everybody yet, so it will be common camping areas available. Locals will be in charge of cooking and any other thing visitors might need. you can also cooperate with them and learn from the nepal culture and way of life at Himalaya, Nepal.

The tribute will be also managed by the locals at their traditional customes way. It will be like a Ghewa ceremony (showed in previous link). During the day we will light candels and it will be prayers and mantras, also with cooperation from lamas, for the good of the beloved who passed away, during the whole night we will party with tradicional dances and delicious meals. We will share intense emotions of solidarity by helping eachother, as even we all look so different because of our cultures background and traditions, we are together for much more things than we can even imagine….In the middle of this wonderful landscape it is very easy to grow friendship between diversity.

This great initiative can be the first to revive tourism in the area and especially to create strong friendships with families who will accompany us and give shelter during our journey. 1. For the ones which just want to join the ceremony and go back.

2. For the ones who want to climb Yala Peak (5.637 meters), which is probably the easiest peak at himalaya for trecking, it doesnt mean any special condition a part of a good fisical conditions.

3. For the ones who wants to have a more challenging climbing before heading home, they suggest to make the peak of Ganchempo (6.387 meters), it is meant to have climbing acknowledgement and experience at mountaineering. As per the pictures of Sandu Chusang, you can see flowers cover the ruins of Langtang and a green blanket comes again. the animals already living as nothing happened and all seems invite us to go back as soon as possible…. Previous post “Rehabilitando el camino a Langtang” shows the pressure to get the roads fixed to make locals and visitant able to restart their activities, but still can help to make the government decide quicker if we all:

1. Send an email to Ministery of tourism of nepal requesting to fix the roads.

2.We sign the collective request from Charge.org with same condition.

I think as much emails and signatures arrive to the Ministery of tourism of nepal the better…..At Langtang Mising/Found we are already 40000 people, if we all do it it could be great. It is not necessary to join the Memorial trip to send the email, some people might want to go later on, or they did in the past or just for solidarity with our country. Thats why i think that all your friends and contacts can help so much just by sending an email and cooperating in the campain of collective signatures. Many thanks to all of you.

The Langtang Family Memorial Group is collecting ideas to create a monument in memorial of the ones who passed away in the tragedy of the 25th April 1015.

They are talking about making an stupa but maybe it can be also relevant to make news “manis” (grabbed tibetan stones) and put them in walls along the way. the walls of mani are tipycal of the peregrination roads and the avalanche dragged the ones there and nothing left in the whole area of langtang.

In our culture it is so much important as it means the same good wishes for humanity than the stupa, but during the route, and those are always bording the left side of the way. Stones of mani have written the buddist mantra “Om mani padme hum”. Several times it uses to be combined with small constructions as stupas or can also be at short meters from the monastery. At some places, on the top of the mani’s wall there are placed cylindres of prayers.
I am looking forward seing you soon walking along to our village and be able to life the reality of all the people which i ve been in touch via email and had intense conversations. Thank you so much to every one!