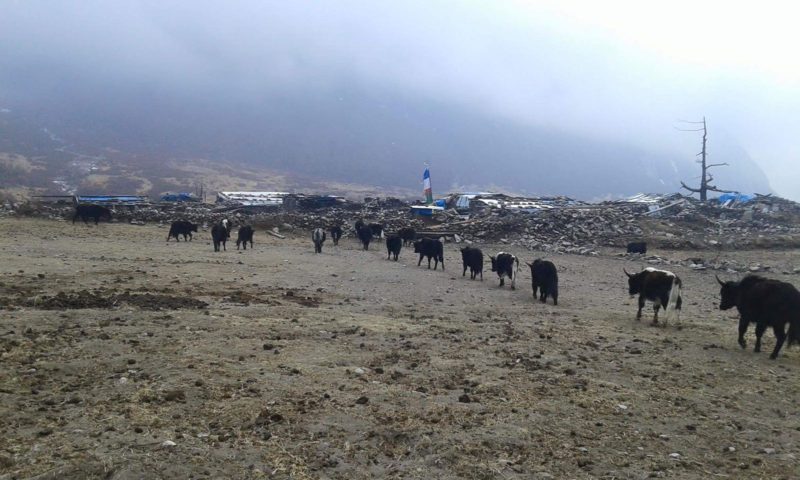 The reconstruction of Langtang begins

It has been nearly a year since the earthquake of 25th April 2015, took everything we had. When we talk about Langtang it was swept away completely. The village has been buried under ice and rock and has disappeared. But through out our tough journey we are so pleased to realize that we have a “world family” with us who has so much love for us.

Personally I feel that it will be impossible for the people of Langtang to face and overcome this terrible challenge/tragedy without your help. We are very grateful to each and everyone who has helped us in different forms. Click Langtang friends.

As the winter is bidding farewell people of Langtang  slowly started to move back to the village and start the reconstruction.

There were few elderly people who had decided to pass the cold winter without proper shelter in Langtang and they did it happily. As I have mentioned in some other posts that for these elderly people living in Kathmandu is out of question. They have never been to Kathmandu in their lives so it was terrible for them to live in the chaotic city.

With the selfless and continuous effort of Langtang Management and Reconstruction Committee , Rasuwa Relief  , OM Nepal  , Sano Madad  and many other NGO´s, Associations, individuals and most importantly the local people from Langtang, it was possible to get most essential raw materials needed for the reconstruction of 116 houses to Kyanjin Gumpa via helicopters.

Small store space where built to store the plywood and CGI tins for the roof, cooking stoves etc in Langtang village. They were able to store this needed materials for the reconstruction and the credit goes to the donations.

Now, these stored materials will be distributed among the local people so that they can start with the reconstruction. The villagers will of course gathers the destructed wooden blocks and stone blocks to be reused again for the new houses.

Although the committee have CGI tin for roof and Plywood for the houses. Now people needs Iron rod, cement and other materials as they are trying to construct the houses which can resist the after shocks. And these materials are costly as we have to add the labor cost (Porters who carries the materials and transports them to Langtang) to the initial price of the materials. Also people have to get the basic foods for the workers who will be there for the reconstruction of the village.

During this year the people have done a lot of things although they had to tackle with the monsoon and hard winter:

They made a great effort together to accomplish their programs and step by step they are heading with their projects to be successful.

It really seems like an incredible job to me, since the normal thing after a tragedy like this would have been to break down and give up…, but the strength of survival sometimes surpasses any foresight.

During these past hard months Langtang Management and Reconstruction Committee has distributed money (the donation they received from various parts of the world) to each family to cover the needs during their stay in Kathmandu.
They tried their best to be fair enough by handing little bit more to the orphan kids.  With these money people were able to celebrate the Tibetan New Year.

As the people of Langtang are Buddhist and they follow their traditions no matter what. So as a form of therapy they made a pilgrimage trip to India and Pokhara and got blessings from Rimporche (The great Tibetan Monk/Lama).  In the western world people take the help of Psychologist but in Nepal people usually visits religious places to heal their pain.

In this way, in the form of therapy, the villagers have made a pilgrimage trip to Buddha Gaya in India, and those who could not go there went to Pokhara and got blessings from Rinpoche, a great Tibetan lama who went up to Langtang after the earthquake and has helped us a lot.

As we already announced in a previous post called “Commemorative Trip”, on April 25, 2016 a trip has been prepared to Kyanjin Gumpa to celebrate, together with the local survivors, a beautiful tribute to all the disappeared. We hope that it will be a good occasion to help the families to overcome the tragedy that struck the valley. It will be a final act of remembrance for the victims that will serve as a comfort and allow us all to move forward with our lives…

Although some tourists have already gone up to Langtang, we hope that from now on they will start coming again as they did before and recover the normality in the area.

All those who want to come to Langtang and do a trekking in the valley do not hesitate to contact us. We will put you in touch with local guides and porters who will accompany you on your trip so that you only have to worry about enjoying yourself.